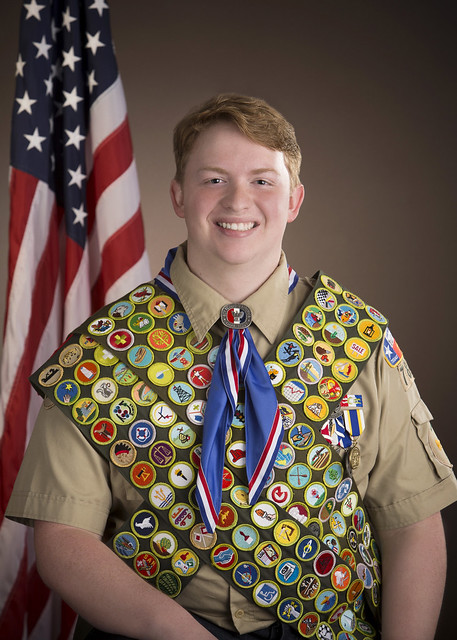 Seth Jensen, a senior in the Katy 3rd ward, just accomplished a feat extremely rare in the scouting program by earning EVERY possible merit badge available!
In the 104-year history of the Boy Scouts of America, about 100 million boys have been involved in the Scouting program and 2.7 million of them became Eagle scouts.
In contrast, there have been only about 250 Boy Scouts that have earned all the merit badges available to them. Seth is now one of those 250.
(see http://www.meritbadgeknot.com/registry.htm for an unofficial list of all those that have earned them all.)
The number of merit badges fluctuates from year to year as some badges are added and others are removed, so the total number of merit badges may be different for each scout. With the 137 merit badges Seth earned, he has been surpassed by only three or four other scouts ever which is truly remarkable.
Seth began the scouting program when he was eleven years old. At that time his dad got him a requirement board and talked about the steps he would need to take in order to be an Eagle Scout. He asked his dad how many merit badges he could get and when his dad told him as many as he wanted, Seth decided that he wanted to earn them all!
Over the next seven years he worked extremely hard to earn his badges. His favorite badge to earn was his scuba badge. Seth was able to go scuba diving with his mom and older brother and said it was incredibly beautiful. One of the badges he is most proud of earning is his bugling badge because he had no idea how to play the instrument at all when he first began working on it. Seth’s father played a big role in his success in accomplishing his goal. With his help Seth was able to attend some merit badge fairs for the badges that were going to be harder to earn.
Not only has working so hard to earn these merit badges fulfilled his long-time goal and helped him become a better person, but it has helped Seth figure out what he wants to do later in life. Through earning the badges he has realized that he loves both medicine and computers and hopes to incorporate those into what he does professionally in his life.
What an outstanding example Seth is to his peers and fellow scouts. We congratulate him on his hard work and dedication in fulfilling this achievement.